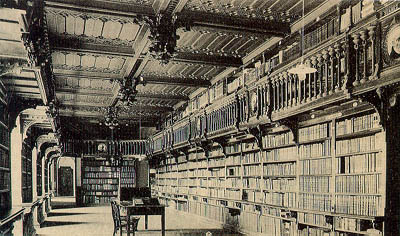 Comillas Pontifical University Library is a service that provides support for study, teaching, and research.

It is organized as a single university library with five service points: one located at the Cantoblanco campus, and four at the Alberto Aguilera campus in the city of Madrid.

The current library has a rich collection of antique books: 23 incunabula, 2,000 books from the 16th century, and some 20,000 volumes by scholastic authors from the 17th and 18th centuries. The unification and coordination of the aforementioned libraries has culminated in the creation of an outstanding bibliographic collection in theology, philosophy, and sciences of the spirit. 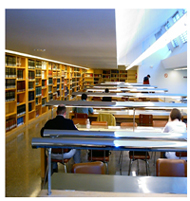 This campus began its existence with the foundation of the Society of Jesus' Pontifical Seminary and University in Comillas (Cantabria) in 1892. In 1967 the University moved to Madrid, and in 1972 it settled in the new Cantoblanco campus. Its own library holdings were enriched as a result of the move to Madrid, with contributions from the libraries of the following centers: Faculty of Theology of Oña (Burgos), Faculty of Philosophy of Alcalá de Henares (Madrid), the Center for Humanistic Studies of Aranjuez (Madrid), the Center for Humanistic Studies of Salamanca, the Center of Oriental Studies of Madrid, and other private donation of great importance, primarily by Jesuits. 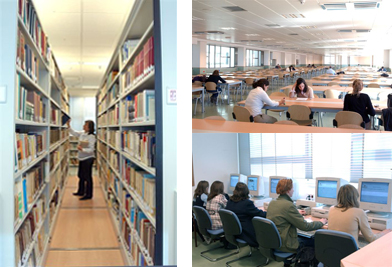 The Catholic Institute of Arts and Industry (ICAI) of Madrid started out as the School for Mechanics and Electricity, founded in 1908. In 1961 Catholic Institute of Business Administration and Management (ICADE) was founded with its own library. The two institutes merged in 1964. In 1980 the library of the Faculty of Canon Law was added and in 1985 the library of Professor Luis García de Valdeavellano was also added. Its collections have subsequently been enriched with the Beltrán de Heredia library (93-94 academic year) as well as private donations.

In October 1996 the Quintana library was established with holdings from the Cantoblanco and Alberto Aguilera campuses.

Since October 2006 there has been a Library Service point in the ICADE Business School located in Rey Francisco street.

Each location holds the bibliographic collections of the Faculties and Schools located on that campus.

Cantoblanco contains the main philosophy, theology, psychology, pedagogy, classical literature, and spirituality collections, as well as a sizable collection relating to other disciplines in the humanities such as literature and history. The Alberto Aguilera campus holds the main law, economics, and business studies collections, supporting the ICADE's courses and the courses at the ICADE Business School, as well as mechanical engineering, physics, information technology, and new technologies for ICAI programs. The Quintana service point holds the translation and interpreting collections. 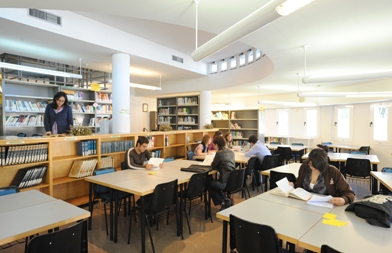 This Library makes available to the university community the bibliographic collections for the Nursing and Physical Therapy programs that our University delivers at the San Juan de Dios Nursing and Physical Therapy School. These programs are widely recognized and benefit from a considerable degree of experience, having been delivered since 1957 and 1993 respectively.